Poez videos date from September 2, 1977, the summer of the 25-hour New York City Blackout and the release of the original Star Wars. St. Mark’s Poetry Project featured Poez in archival video recordings of the leading poets of the day. Poez is the only one not holding a text. When invited to participate, Poez had been in New York for just two months. At that time, video cameras were the size of a refrigerator, and required a sound stage and specially-trained camera operators, as well as either commercial sponsorship, or an art foundation grant. The Poez video archive includes dozens of videos, live and studio, solo and in collaboration with other musicians and video makers. The selections on this page change from week to week and are only a small sample. Many more are to be found on various other platforms, such as Amazon Prime, Vimeo, and YouTube.

This update’s [September 14, 2019] selections are This is Not The Time  (Be A Human) 2019, Joeann Calabrese’s newly-edited 5-minute award-winning film interweaving this protest anthem with scenes from US history memorializing acts in support of freedom; In connection with an upcoming collaborative live show these two videos: Suzanne Vega with Poez The Poet at the legendary Me & Thee Coffeehouse (see video for details); and Once Upon A Time in Greenwich Village, 3 minutes; released this month, a cartoon videographic with a live soundtrack of Spontaneous Combustion digital-delay enhanced, at a little folk bar that fell on bad times, Folk City in New York’s Greenwich Village; and Untouchable – Woman on Keys, a collaboration also with Suzanne Vega, and painter Mark Kostabi.

Once Upon A Time in Greenwich Village 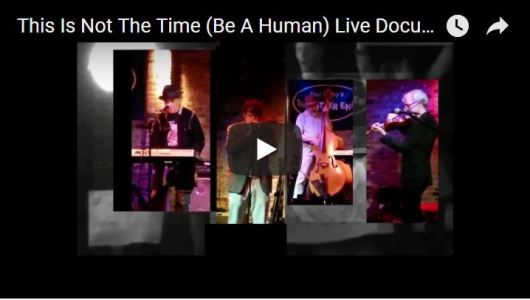